I have been trying to migrate my existing IntelliJ IDEA plugin to use Gradle. In order to do this, we have to use the Gradle IntelliJ Plugin 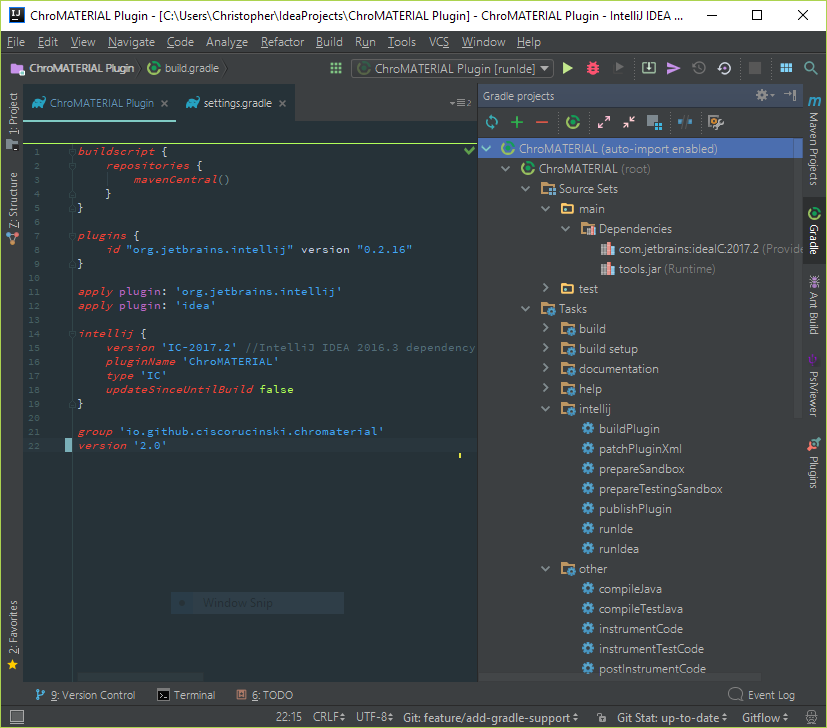 When I tried to add Gradle support, I kept on noticing that I was getting a bunch of unable to resolve symbol "x" issues in my build.gradle file (those are all the red in the above picture). I noticed that the dependencies were updating; however, I was getting another issue that seemed more severe.

See the below link for the issue that I submitted. It was closed due to the fix not being related to the plugin, but to Gradle configuration apparently.

It was suggested that I am pointing to the wrong pom file.

I should use this …

So how do I change which pom file Gradle uses to download Gradle IntelliJ Plugin v0.2.16?

I never configured anything with pom files before, and the setup tutorials for the Gradle IntelliJ Plugin never contained any information for this. I just used the provided code snippets and build my project. 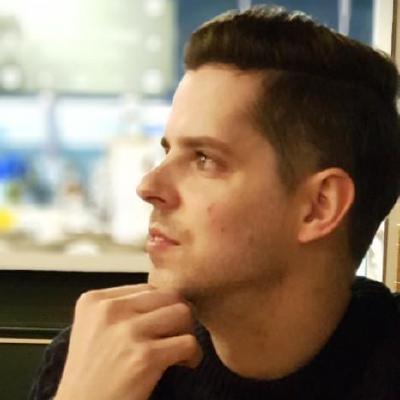 ChroMATERIAL is an IntelliJ Platform coloring scheme that expresses the chromatic nature of Material Design within IntelliJ and Android Studio. It is intended to highlight the most import aspects o...

I have 2 branches. master branch has no Gradle support, while feature/add-gradle-support use the code and configurations for Gradle.

Note: Nothing in my included and excluded files links to pom files

I cloned your project, and gave it a go and it seems to work for me.

One suggestion would be to remove the buildscript section and the duplicate plugin application.

I changed the build.gradle to:

ran ./gradlew idea, opened it in IntelliJ and none of it’s red?

Thanks Tim for the reply. So, I modified my build.gradle file and ran the specified idea task and then reopened IntelliJ IDEA; however, everything is still the same.

ran ./gradlew idea, opened it in IntelliJ and none of it’s red?

Just to be clear, when you say none is red, do you mean that there are no errors (as I am using a different color scheme. The Darcula color scheme will have everything grey and underlined instead of red).

I don’t see test and main source sets, I get loads of provided and test dependencies in the project properties -> modules view though, is this where you mean?

Can you explain what you’re seeing?

The picture looks great. Looks like it works perfectly. I don’t know anything about the project properties -> modules view

Here is another picture that shows a change to the com.jetbrains.ideaIC dependency.

What’s the root src folder? I don’t have that from the repo?

The root src folder is in ChroMATERIAL/src

I have to modify my Gradle file to indicate that change as the Gradle IntelliJ Plugin cannot build my plugin properly right now. I am not certain of how to do that just yet, but I want to fix my current issue before I make some possible wrong changes.

Now, I have 6 apparent modules (I should only have 2 I believe, but the other ones keep on coming back and I don’t know why)

Does this answer your question? I come from Android Studio where most of this just works.

Can you try removing your intellij files (*.ipr, *.iml, *.iws) from all levels, and re-create the project by simply doing “File -> Open”, and choosing the root build.gradle file?

Not sure what’s going on here, and can’t reproduce as https://github.com/ciscorucinski/ChroMATERIAL doesn’t have the same content as you are showing me…

Am I suppose to create a new project location? I get a directory is already taken issue when I selected the current projects directory location, but if I choose a new location, then I cannot use the Gradle wrapper

Works for me with the code from the repo on Github, but as I said, you have a different codebase to me

That worked to fix the red issues of mine.

I lost the plugin module as it is just a normal module now. I still have a weird looking project structure from modules that I didn’t create or configure.

In my .idea/modules.xml I have the following…

The last 2 modules (which contain ChroMATERIAL_Plugin in the path) are modules that I never specified or configured. In fact, that was the name of a previous project that I originally had before creating the ChroMATERIAL Plugin project. I don’t know if the above is related to these extra modules are not.

These modules will always come back after a little bit of time after I delete the unnecessary ones. This is also true for the related .iml files inside of .idea/modules/ChroMATERIAL/ folder.

OK, that is good then. I just have to figure out how to get the ChroMATERIAL module to become an IntelliJ Plugin Module, when I opened the project, it lost that

After I re-instantiated the ChroMATERIAL module to be an IntelliJ Plugin module, I got back all the red issues.

I assume this is a bug of some kind on the IntelliJ IDEA side. As I have said before, IntelliJ is parsing the file correctly and giving me the right dependencies, so it is reading the issue-prone file correctly.

But thanks for all your help!

Nothing is wrong with IntelliJ. You have to decide what project model to use: gradle or intellij one. If you’re migrating to gradle why do you need to go back to using plugin module type?

@zolotov I assumed I had to because I am making a plugin. It also allows me to select where the plugin.xml file is located. Also, I cannot do stuff that I could do with the plugin module type…like prepare plugin for deployment option in the menu.

Edit: Tight now, running the Gradle tasks does nothing. I know that I need to modify my build.gradle (or add one to the sub-project) and that is the reason why it doesn’t work now, but I assumed all the normal plugin options would still be available.

It also allows me to select where the plugin.xml file is located.

If you process resources with Gradle, it’s not really an option, the file must be located in <resources_root>/META-INF/plugin.xml.

like prepare plugin for deployment option in the menu.

There are buildPlugin or publishPlugin Gradle tasks for that. Read gradle-intellij-plugin README to learn more about provided tasks.

I know about those Gradle tasks, but I also know that my build.gradle setup was incomplete and that the Gradle tasks wouldn’t do anything. I assumed I would still have the menu items like all plugins did before (i.e. didn’t realize it was an all or nothing approach).

I wanted to fix all my unresolved symbol issues before I did any of that listed above.